The Village of Northbrook has entered into a contract with Community Partners for Affordable Housing (CPAH) to manage the Inclusionary Housing Ordinance (IHO) adopted in December 2020. CPAH has provided the following documents to assist in understanding the IHO policy in Northbrook.

If you are interested in renting, or buying, an affordable housing unit when one becomes available in Northbrook please contact the following people at CPAH:

Those who are interested in renting affordable units when they become available can complete a pre-application form here.

Please note that at this time there are no available units. The Village will work on providing updates to announce available units as they are created.

UPDATE: On April 12, 2022 the Northbrook Board of Trustees adopted Ordinance No. 2022-15 which amended the Affordable Housing regulations in the Zoning Code to now require independent senior living facilities to comply with the affordable housing requirements.

On December 8, 2020 the Northbrook Board of Trustees unanimously adopted a series of Ordinances and Resolutions to advance its policies on promoting affordable housing. The Village adopted an Affordable Housing Plan in 2005 with the stated goal of increasing the supply of affordable housing units to ten percent (10%) of the total housing stock. The 2005 Affordable Housing Plan used the State of Illinois’ definition of “affordable housing”, meaning that housing units for sale or rent are within the means of households that have “moderate-income” levels (households with income of 50% to 80% of the area median household income) or “low-income” levels (affordable to households with income of no more than 50% of the area median household income).  Households are expected to have to pay no more than 30% of their income on housing.

The latest estimates by the State of Illinois (2018) found that 5.70% of the housing units in Northbrook are affordable. Despite having adopted the 2005 Affordable Housing Plan, the Village had only moderate success implementing the original plan. The map below illustrates the percentage of housing units that were “affordable” in 2018 for Northbrook and nearby municipalities based on the State of Illinois definition. 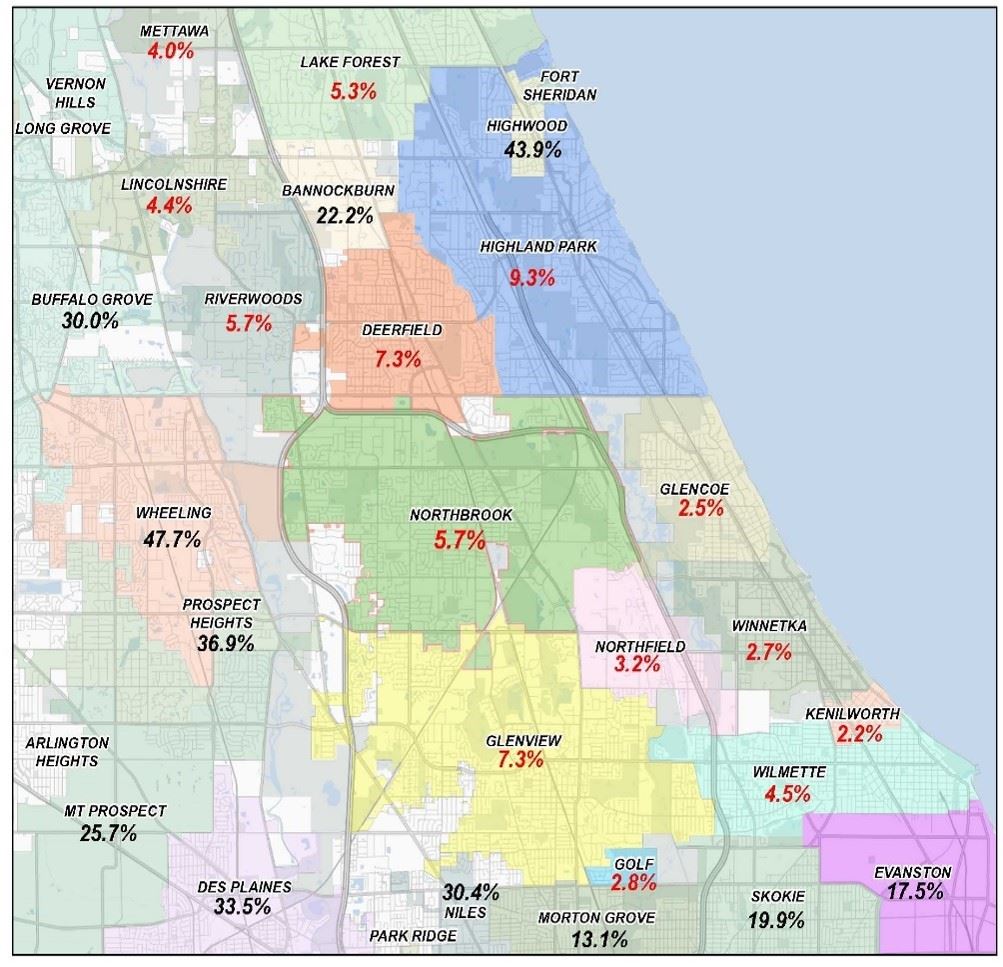 In June of 2019 the Board of Trustees held a meeting to establish their primary goals for the next several years.  The three primary goals of the Village were to:

A link to the June 8, 2019 meeting minutes is available here.

After setting the initial goal of increasing the amount of affordable housing in the community, the Board of Trustees and Plan Commission held a series of meetings, including a joint meeting of the Plan Commission and Board, to discuss the best way to craft the policies before initiating the amendments. An August 27, 2019 report by the Department of Development & Planning Services helped provide useful background information on housing conditions and policy options. The August 2019 report can be viewed here.

The Board favored the use of an “inclusionary housing” requirement for larger developments that stipulated that a certain percentage of new housing units constructed would need to be maintained as affordable housing.  They also favored the use of a demolition tax on existing homes that are torn down (an approach used by Highland Park, Lake Forest and others).  Funds collected through the demolition tax and other sources (such as “in lieu fees”) would be deposited in a special housing trust fund to help advance local housing initiatives. Key policy issues were thoroughly discussed by the Board of Trustees in these meetings prior to setting a date for a public hearing. Minutes of the initial Board and Plan Commission meetings are available through the links below:

The complete agenda packets for each meeting, the minutes and a video recording of each meeting can also be viewed here.

The Plan Commission held two public hearings on this application (September 15 and October 20).  Copies of the meeting minutes and full agenda packets which include staff reports and background information for each of the Plan Commission meetings can also be viewed here.

The Plan Commission also recommended that the Village take some additional actions:

Board of Trustees Approval of Affordable Housing Components on December 8, 2020

The Zoning Code amendment, while rather lengthy and complex has the following basic components:

- The developer will be required to offer 6 of the units as affordable housing units (15% of 40 = 6 Affordable Units and 34 Market Rate Units.)

- If the 6 affordable units are provided, the developer may then receive an additional development density incentive set forth in Section 9-307, allowing the development to expend to 46 units, one additional unit for each affordable housing unit provided. A final round of calculations is performed to determine the total affordable housing unit requirement: 15% of 46 units = 6.9.  Since 6.9 includes a fraction greater than ½, the requirement is to provide 7 affordable now seven (7) affordable units in addition to the 40 market rate units.)

If you have questions regarding the affordable housing standards, please contact the Department of Development & Planning Services.